Text of How To Do A Good Death TedX Talk

For anyone who is hard of hearing, or who prefers to read instead of watch a video, here’s the transcript of my Ted X talk, How To Do A Good Death. 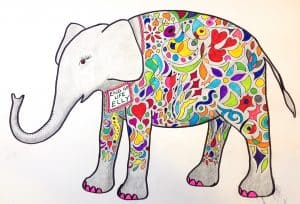 There’s an elephant in the room. In fact, there’s an elephant in the room in every house in the country. She’s really sad, and lonely, because people are afraid of her, and think that she doesn’t exist. Pretend that she doesn’t exist. Her name is “End of life Ellie”. And I’m talking about her here today, because I wanted to bring in the elephant from the room. It’s a lot easier to talk about this subject when you do that.

I’m a very practical person, I like to get things done, I like to have lists and tick things off- and I like to know what is happening, and that has served me very well on the whole. Up until the time that something happened that I was completely unprepared for.

Six years ago, the phone rang. It was my husband. “It’s stomach cancer.” I was really shocked, and I hadn’t thought for one minute that it would be anything worse than a stomach ulcer. We decided that we needed to tell the family and I rang my brother. Towards the end of the conversation, he said: “Well, think of it this way, at least the food bills will go down’, which was our introduction to the black humor that surrounds topics that we are uncomfortable with.

Which is pretty amazing, because statistics show that one hundred percent of us, are going to die. That’s all of us here, every one of us, me included.

I am passionate, now, passionate about educating people to become more at ease with dying, with death, with grief. I am passionate to help people stop crossing to the other side of the road when they see a grieving person that they know, because they feel awkward and don’t know what to say. It still does happen.

And I’m passionate about people completing end of life plans, just like a birth plan, and for that to become the norm.

Six years ago, with that diagnosis for Philip, he was recommended chemo, an operation and more chemo.

He used it as a wake up call. He listened to his heart’s desire and he started writing again – for which I was really grateful, because he was a great writer but he hadn’t been doing it. He took care of a few relationships in his life from his past where he had fallen out with people, and he mended them. And he asked some very important questions, and here’s how that happened.

The operation didn’t work, they didn’t get all the cancer out and so we were faced with the prospect of him dying, perhaps sooner than we had thought. One day I received an email from a friend Barbara in Los Angeles, and in it was a long list of questions where she said, “Please make sure that Philip answers these before he dies.”

So one Saturday morning I sat up in bed with him and the laptop and I asked him the questions, and he gave me the answers. And they’re not easy questions. Things like “What do you want your body to be dressed in?” and “Do you have any precious things that you would like to give to people?” And even more practical things, like “Tell me how the car works and the burglar alarm system”. Very practical. He gave me his answers and you know what, that morning turned out to be a really wonderful morning. It was so loving, and we were so intimate. Yes, it was poignant, but it was full of tenderness. Later on we referred to it as our last project together.

So he went to hospital. And one of the things that happened there was he gave me a message about when he was going to die. I had friends staying with me, and we were taking it in turns to stay with him in his room overnight, so he was never alone. One night I received a text in the middle of the night saying, ‘Please come up, Phillip is distressed.” So I shot up, we managed to calm him down and he went back to sleep.

And then our friend told me, “He said he wanted to watch a television programme!” Now, this was really odd, especially in the middle of the night, as he had not wanted to watch television the whole time he was in the hospital, six weeks.

She said, “He wanted to watch Countdown, his favourite program.” Now I knew, because I had studied, both professionally and personally, and had done a lot of reading about dying and death and grief, that people often send a message to their loved ones when they are near to the end. And I knew immediately, that he was telling me, he was counting down. And actually, that felt really good, really good.

The next day, I was sitting with him, with my friends there as well, by the bed. He was doing that kind of rattle-y type of breathing, which is so unpleasant to listen to. Then it shifted.

You don’t know when the last breath is, until after it’s happened.

Somewhere in that gap, I saw his face had changed colour a little bit. But more to the point, I had to stop talking to him lying on the bed, I had to turn about and look at the ceiling, and carry on talking up there – as if he were up there, because he was not on the bed anymore. All that was there was an empty bag.

I was propelled into grief. On a stormy sea, batting around, all over the place. Starting with shock, and horror, and disbelief – even though I knew he was going to die.

But it also included sadness, tears, rage, anger, worry, anxiety – and even moments of joy. That really muddled me up. I had no idea what was going on at all.

But this time, I don’t know why, I just knew I had to open the door, throw up the blinds, open the windows – and open the back door, at the same time. Because then the feelings could come, be around for a bit, and then they could leave easily. And that served me really well.

One morning, about four weeks after Philip died, I woke up and the thought in my head was, “If that was an empty bag lying on the bed, what is this? A filled bag? They are all filled bags! What is it filled with?”.

And that became a mission for me, having to find out. It was really important. At the same time as being on that mission, I was being humbled by grief. Very humbled. Because I discovered I had all kinds of judgements about it. I judged how long it should take. I judged what it was that I should be feeling, and I judged when those feelings were around. It didn’t stop me feeling the feelings because of the open door policy, but I had the judgements as well. What I discovered in this journey, was that grief has many forms, and that they are all okay.

I have another little story that I want to share with you, that helps to illustrate this. About three months after Philip died, we had another terrible family tragedy. His eldest granddaughter, Becky, just sixteen, also died of cancer. A few months after that, I met with her parents and her siblings, down in a cottage in the Southwest of Scotland. We were going to scatter Philip’s ashes, and some of Becky’s ashes, in a ritual honoring of them both, at a place where the families had loved to meet and have wonderful holidays.

One sunny morning, during that week, I was out walking on the beach with Becky’s sister, Sitha, aged nine. We were looking for white shells, amongst the black rocks. I wanted to know how she felt about her sister dying, so I asked her, “Sitha, what do you think happens when someone dies?”, and she said, without stopping looking for the shells, “Oh! They go up to a floating garden in heaven! Grandpa Philip is up there, with his boat! Becky’s living there in a mansion, with a room all to herself! Michael Jackson’s there too, and all the people from the Titanic!”
It was so beautiful. I was so touched, and tears came to my eyes. This little nine year old girl had found a way to describe a terrible thing that had happened in her family.

About three years after Philip died, I published a book called, ‘Gifted by Grief’. I was able to call it that, simply because by this time, I had felt gifted. I certainly hadn’t felt like that at the time, but over the years I began to notice that there were very many gifts that I was receiving. And one of them of course, is being able to stand here tonight. It is ironic, but if he hadn’t died I wouldn’t be here tonight. I am grateful to be able to speak like this.

So although I’ve said some of the things that contribute toward a good death, here are the three really important ones that I’ve learnt.

Now, because I am also a very practical person, I like to know, how do you do it, how do you live here now? So what I did was, I filtered everything through a little sentence. The sentence was, “Am I enjoying myself?” Really simple. “Am I enjoying myself?” If the answer was no, I just stopped what I was doing. And I still do that now. It does make for a few awkward situations sometimes, but I now know that life is too short to bother about that, or to be worried about it.

The third thing: Answer the questions. Remember the questions that I asked Philip? There are lots of them, there’s lots that you can do to prepare well, now, for a good end of life.

Finally, I would like to acknowledge the elephant in the room again, and I would like to invite you this week, maybe to go and acknowledge the elephant in the room in your house, and maybe have a conversation with her. Maybe have a conversation with one of your friends, or one of your family, about dying. About death, or about grief. And become much more at ease with it. Thank you. 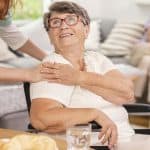 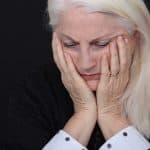