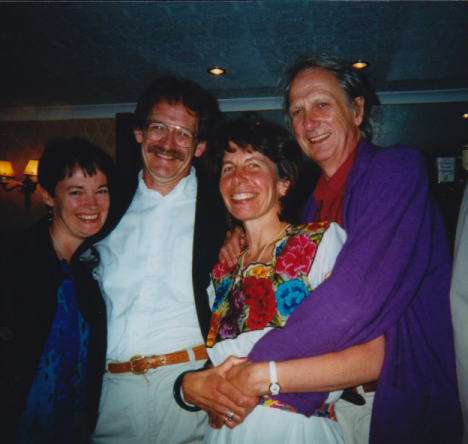 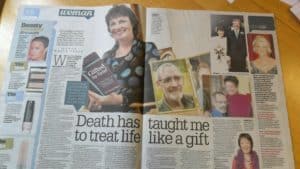 After my husband died in 2011 from cancer, I was overcome with the horror that I, too, could suddenly get ill and die. The thought of that happening when I was not enjoying myself in life was unbearable, and so I began to filter everything I was doing through the lens called ‘Are you enjoying yourself?’- and if I wasn’t, I stopped doing it.

This led to all sorts of things, including plans being changed several times at the last minute, and even to walking out of a meeting 5 minutes after arriving there.  But I honoured and trusted my answer to this question, meaning that even if I felt terrible due to grief, at least I didn’t put another layer on top by doing something I was ‘supposed’ to be doing.

But did I really have to face my husband’s actual death, and my imminent death, to arrive at this place?

It would seem so.

Over the years, Western society in particular has attached itself to the notion that death is something to be beaten. To be put off for as long as possible. To ignore, until the last possible minute.

That’s been helped by the medical profession and science which has developed at such a rate that diseases which were once a death sentence can now be managed in such a way that a person can still live a full life.

Because of this we are all less familiar with dead bodies than our ancestors would have been, even only 70 or 80 years ago. Then, at least in the UK, it was not uncommon for a family member to die at home, accompanied by relatives and perhaps a community nurse or two.   The body would then be laid out in the parlour, and everyone would come to pay their respects.  In the process, we all accepted that death was part of life and that was the deal.

Now we are so far removed from death that when the effect of the pandemic began to hit hard, we were stunned and shocked. How dare this happen, to us, who are so used to being in charge of life?

But the fact is, we are not in charge of life.

We never have been, it’s always been a delusion.

What we are in charge of is treating life as the very precious thing it is.  No matter what the circumstances.

And that’s what we’ve been reminded of with all the deaths from covid-10.

It was early on when the virus hit the UK that I was out for a walk and seriously considered the fact I might die from this. It was unlikely, but it could happen. I had already taken care of all the end-of-life affairs, the will, the power of attorneys, the advance directive, my digital life, the amount of stuff I have etc, because of the work I do helping people create end of life plans well before they are needed. I wasn’t bothered about any of that.

But I did realise that if I died I would regret having spent so much time working, and not enough helping build the house my new partner and I are building together.  That day, I completely rearranged schedules, and now that imbalance has been rectified. I spend some time there every day now.

But the question remains. Do you really have to be facing death before you can fully appreciate life?  So to address that, ask yourself this question, at any moment:

‘‘Am I enjoying myself?’

If you’re not, or less than you could be, even despite the current restrictions, just pause and find out what needs to happen so that the answer to that question can be yes.  It only needs to take a moment or so.

And while you’re practicing this, do yourself a favour and do the obvious – face death in a practical way that will most support both you and your family. (Or continue where you left off, of course!)

That means putting in place all the elements of a good end-of-life plan that will make the biggest contribution to your family, the doctors, and of course, yourself, right now.

You might be surprised and discover that you enjoy doing this too (it IS possible – in fact ‘enjoyable’ is the word most commonly used by people who have taken our courses!  Amazing, isn’t it,  but true).

Here’s how you can take action:

Q: Do you like do-it-yourself?
A: Get a copy of theB.I.G. Workbook – and FILL IT IN!  (not just leave it on the shelf…once it’s complete that’s your end-of-life plan done and dusted!)

Q: Do you get the best results in a live group with others?
A: Join in theEnd of Life Planning Made Easy coaching course to help you complete your Workbook (next one with live coaching begins 15th June, but you get immediate access)

Q: Would you like to bring this really important work to others, including family and friends?
A: Become an End-of-Life Plan Facilitator– new Intensive training starts soon, early bird offer ends on 3rd June!

Q: Would you prefer ‘Get It Done!’ private coaching with Jane?

A: This is very rare, but 2 slots have recently opened up. Contact me for an initial conversation to see if this is the best option for you (no hard sales, or even soft, by the way – just discovering what is the next best step for you)