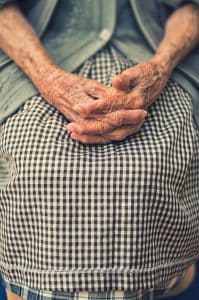 Sylvia was becoming more and more frail. It was clear that, though in good spirits, her body was nearing the end of her life. She kept having visits to hospital, and had recently had a fall which had precipitated one of these.

But how on earth do we talk with someone who is dying?

If you’re over 50, and especially if you are a woman,  you will often find yourselves being the companion of a parent, family member or close friend who is coming towards the end of their life.  So learning how to talk with them about their situation is essential.

This kind of conversation can be anything from downright awkward to a beautiful connection and anything in between. Do we ignore the fact? Do we speak bluntly and matter-of-factly of it? Is there a balance in between?  And what about if the person themselves does not want to talk at all?

These questions and more are addressed in my new book Before I Go: The Essential Guide to Creating A Good End of Life Plan, out now in USA, and 9th August in UK. Here are 3 tips from that book on just how to cope in this kind of situation.

1. Ask what their understanding of their situation is.

This is an obvious question when you think about it, but it is very often overlooked in these days of the medicalization of dying and death. The more common situation is that someone is told what is wrong with them, and assumptions are made as to what this means.  In particular, the assumption that the patient wants to be kept alive (sometimes at seemingly all costs) can often get in the way of what that person may actually want. As a relative or friend, you may be in a better position to simply ask ‘what do you understand is happening to you?’  When I asked that of a friend who was dying in 2014, she said she knew she was coming to the end, and she accepted that, but she wanted her body to get a move on – she was finding the slow drawn out nature of her death to be quite a challenge. She was also quite clear she wanted a certain medication to be stopped, and another started. Finally, she told me she had said all that needed to be said, and that she was ready to go.  This conversation helped me to be with her during this time.

2. Be willing to accept what is happening to them

It can often be the case that family members are the ones who are most distressed about their loved one dying.  Hence the ironic situation sometimes heard of when the one who is dying ends up comforting the one being left behind. It can really help a dying person if you are able to simply acknowledge anything they want to say, accepting it without denial.  This means you will have to come to terms with it yourself, putting their needs ahead of yours. It’s not uncommon for those who are closest to the dying person to actively want them to die. I remember simply wanting my late husband to be out of pain, and free from a body that just was not working any longer. I knew it would be difficult for me without him, but when you love someone, you don’t want them to be suffering, even if it means it will be harder for you.

3. Listen for the metaphors

Often a dying person will ‘give a message’ to a close loved one, in such a way that only that person can understand it, and it is often a message demonstrating their understanding of what is happening. Because I had read lots of stories of this happening, I was very aware when Philip told me he wanted to watch what had been his favourite TV show. By this time he had been in hospital 6 weeks, and had been told there was nothing more that could be done. He was too ill to be moved, so we knew the end was coming soon.  He said he wanted to watch Countdown, a popular British programme focusing on numbers and word games. Wanting to watch TV at all was very unusual as he hadn’t requested this for the whole of the previous weeks. But when I heard that he wanted to watch ‘Countdown’, I knew he was telling me that he was ‘counting down’.

I found this to be very comforting – the fact that I knew he knew what was happening helped me to be calm for the next couple of days as he became weaker and weaker, less awake and unable to speak.

This is a time for tenderness, open hearts and respect shown to all concerned; and it is made easier when we are able to talk honestly and openly about dying, about death and about grief. It is only when those topics are forbidden in some way, or that we are frightened of them, that problems arise.

Naturally conversing in this way is part of a good end of life, and part of any plan that is made for that end. I go into this in much more depth in the book, inviting you to start conversations now about this subject, regardless of whether you are caring for someone who is dying or not. The more we become comfortable with this kind of conversation, the easier it will be to accept what is the one thing that will happen to us all.

Get a copy of Jane’s new book here:  https://beforeigosolutions.com/beforeigoguide/