How To Talk With Someone Who Doesn’t Want to Talk 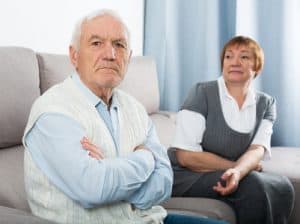 Bernard stomped out, shouting, ‘No. I will not talk about this!’  His wife Jennifer felt shocked. She hadn’t realized he felt so strongly. But now she was left with her questions:

‘What will I do if you die before me?’

‘I don’t know anything about our finances, how will I cope?’

‘I need to know more about our insurance situation’.

Jennifer felt distraught. Statistics had showed that her husband was likely to die before her, the thought of which alone was unbearable, but even worse were her thoughts of  ‘how will I manage without him?’

This story was told to me recently, (names changed) and it is a very common one. We take roles in our marriages and close relationships, regardless of what sex we are. What it means when one of you dies is that the person left behind often has no clue of what their partner or spouse took care of.

The answer to Jennifer’s questions above is obvious – find out the answers!

What if, like Bernard, your partner or spouse simply will not talk?

Here are 5 things you can do when you’re faced with someone who, for whatever reason, doesn’t want to talk about end of life matters.

Most likely, the subject of dying, death and grief is uncomfortable. Let’s face it, even when you are willing to talk about these topics generally, let alone about your own death, it is not easy.

If you’re in this situation with your loved one, then you can plant seeds. This means you need to be completely unattached to the outcome. It’s like you really are planting a seed – some of them come up, but lots don’t, and you don’t feel angry or despairing with all those that don’t germinate, do you? (At least I hope you don’t!)

It’s the same with your partner – a seed planted can be as simple as commenting when someone famous dies. Even saying ‘I wouldn’t want that’, upon hearing that they have been buried, is a good start. You could also elaborate and say ‘I’d want to be cremated. What about you?’  If that feels like too big a seed, leave out the question about them for another time.  Even if you don’t get an answer, remember you’re just doing the planting – you are not supposed to see results immediately.

2. Talk about concepts, not actualities

It’s often easier for people to talk about something in theory, rather than when it relates to themselves directly. For instance, when you see a hearse passing by, you can make a comment on it. When a funeral happens in your family, you can talk about the person who has died. Any talking about dying, death or grief, in any way, is helpful and allows people to get used to the idea in and of itself. Later, they may then find it easier to address their own death.

3. Introduce the idea behind the refusal to talk

If this is not the first time this has happened, then introduce a conversation not about the content, but about the pattern that you’ve noticed. So Jennifer could say to Bernard, “You know, every once in a while I feel the need to talk about what will happen to the children after we have died. The last couple of times I’ve tried to talk with you about this, you’ve just said ‘I don’t know’ or even that you don’t want to talk about it. I know this is a tough subject, and I don’t want to make it any worse. But I do want to be able to talk about these sorts of things so we can come together on something that will effect our family, whether we like it or not. Why do you think it’s so challenging to have these conversations? What’s going on?”

If the other person still won’t engage, ask them to think about it instead. Say something like ‘Well, I don’t want to make your uncomfortable, but I do want to talk about it. Can you think about it and maybe set aside some time tomorrow to discuss it a bit more?

4. Keep on keeping on

Let’s say Bernard continues to refuse to even have the subject of wills mentioned. That does not preclude you from stating ‘I have made you the executor of my will’, or ‘I’m going to make _______  the executor of my will’.  It’s important that you continue to take care of your own end of life plans, without putting any onus on them to do the same – and there is a lot you can do without involving them.  If they don’t want someone else to be the executor, then the deal is that they need to engage with you on the basics at least.

Perhaps you have children that are willing to talk about it, then let them know your preferences and arrangements. If none of your family will countenance a conversation of this nature, then find someone who will – a good friend, someone from your church or spiritual organization, a professional.

Think up ideas about how you could introduce this topic in a fun, more lighthearted way. Look at children, they often appear to deal with death much more easily than adults do. You could tell this story that I heard at a recent conference:

A father and his wife were sitting around the dining table, discussing where they wanted their ashes scattered when they died.  They asked each of their three children in which of their favourite places they would want their ashes scattered. The oldest said his team’s football ground; the middle one said the beach where the family had just been on holiday; and the youngest said ‘Pizza Express!’

This could be the start of a conversation, even with friends, about where would everyone want theirs scattered. There are some wacky ideas out there, such as being boosted from a rocket, blown away in a helium balloon, or making the ashes into some kind of art work.

Finally, I want to leave you with another true story.

Patty was on one of my Before I Go courses, and had the exact problem I’m writing about today  – her husband refused point blank to talk about any end of life stuff. This was important because they were both on their second marriage, each had children from the previous one, and the lives of those left behind when Patty and her husband died would be severely impacted if they didn’t have a conversation.  Patty left the class wondering what on earth she was going to do about the homework that had been set. The following week she turned up, saying she’d asked her husband to help her with the homework, and within this context what she expected to be a short, 15 minute conversation had turned into an hour and a half which was surprisingly enjoyable and fulfilling and where they sorted out a lot of practical issues.

Moral of the story? You never know what might happen!  Take the risk, use one or more of these tips and see what happens.

How do I start on sorting out my stuff?

This website uses cookies to improve your experience while you navigate through the website. Out of these, the cookies that are categorized as necessary are stored on your browser as they are essential for the working of basic functionalities of the website. We also use third-party cookies that help us analyze and understand how you use this website. These cookies will be stored in your browser only with your consent. You also have the option to opt-out of these cookies. But opting out of some of these cookies may affect your browsing experience.
Necessary Always Enabled
Necessary cookies are absolutely essential for the website to function properly. This category only includes cookies that ensures basic functionalities and security features of the website. These cookies do not store any personal information.
Non-necessary
Any cookies that may not be particularly necessary for the website to function and is used specifically to collect user personal data via analytics, ads, other embedded contents are termed as non-necessary cookies. It is mandatory to procure user consent prior to running these cookies on your website.
SAVE & ACCEPT