Ageing – The Secret Behind the Greatest Opportunity You’ve Ever Had

March 22, 2018 / Jane Duncan Rogers / No Comments
https://youtu.be/04xxw4ojIlc
Update:  I am very sad to report that Mark Davenport, shown on this still here as so vitally alive, was diagnosed with cancer earlier this year and died in June.  Heidi plans, in time, to continue with The Wisdom Factory. Thanks to both of them for the wonderful work they have done together (and will continue to do, in a different form).
There are easily identifiable ‘time markers’ on The Wisdom Factory website, allowing you to pick and choose what you listen to; here’s a few examples:
05:50 Gifted by grief? She explains about a new “I love you,” and more….
29:20  A new relationship between the mind and the heart.
40:45 Donating organs? Different points of view.
45:45 It’s not necessary to remove the body immediately!

You can watch this hour-long conversation here:

Most people think ageing sucks. And it especially does, when you compare how you are now to what you were then. It’s all very well having memories, but when you become stuck in them, or resentful because you can’t do what you want to do in the same way, then they can be a problem.  Jane Duncan Rogers will talk in this interview about why and how ageing is an opportunity, and what the secret is to being able to fully enjoy life, no matter what age you are.

Ageing is arguably life’s last attempt to have us learn it’s most precious lesson. So much of becoming older is about uncertainty, that we are forced into taking things one day at a time. Doesn’t that sound a little like the ancient message from the sages to ‘live in the moment’?

Jane, propelled into grief after her 66 year-old husband died of cancer in 2011, wrote Gifted By Grief: A True Story of Cancer, Loss and Rebirth just three years later. Even while her husband was alive they referred to his condition as a gift – hard to believe, maybe, but true. This did not alleviate the pain of the grief as she was widowed aged 54, but Jane eventually found that the same applied – hence the title ‘Gifted By Grief’.

Now she is discovering, as she ages herself, and is providing assistance to ageing parents, that coming towards the end of life has hidden gifts too. Her latest book (due out in August) is Before I Go: The Essential Guide to A Good End of Life Plan. This arose out of the questions she had asked her husband in his last year, and which were to prove so helpful to her after his death.

Listen in to discover how to look at ageing with eyes of love; with softened thoughts and with feelings of compassion, and explore the secrets of ageing that can be found so easily for those with open eyes, hearts and soul. 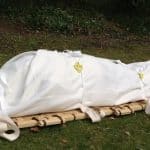 What is a shroud?